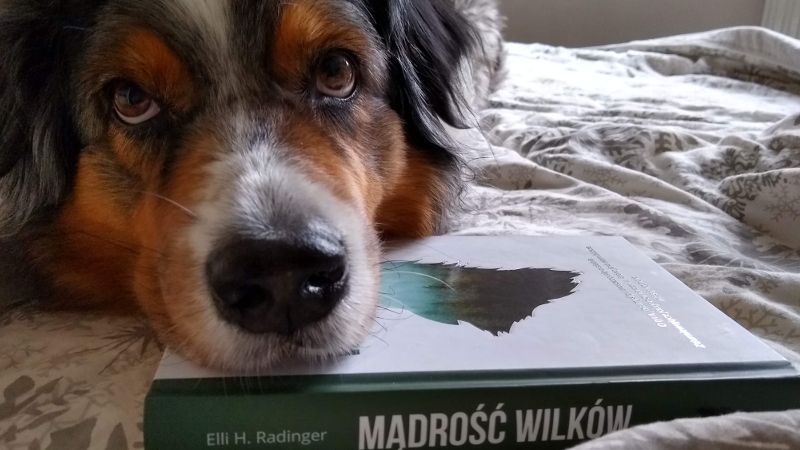 One day, a good man encountered a wolf.
The man was amazed by the wild nature of the animal, which gazed at him with its deep eyes.
They stood staring at each other for a few minutes, and then the man said: “I know that your life is hard: what can we as human beings do to defend it?”
The wolf was silent for a moment and then replied: “Just forget about me”.

I spent my two September afternoons with some essential reading (Polish edition) - subjective, but accurate, written by an bystander and ethologist at once, summarised and/or illustrated with real examples coming from personal observations of wolves, witnessed by someone fascinated with their social nature.

Wolf population reintroduced to Yellowstone in 1995 is the most precisely researched and most often studied wolf population in history so far. Its still disputable ecosystem impact - in collaboration with scientifically evidenced influence on the elk behavior and population ecology as its natural prey species - was main foundation to construct the trophic cascade model and confirmed definition.

Wolf aspect was always present in fable, lore and casual culture. Certain modern theory relies on wolf-human co-evolution.[1] For the "first nation", indigenous residents of Canada, the wolf is a living being which connects time and space. Ojibwe tribe considers the wolf as a spirit guide, a brother of humans, like the rest of animals - humanity wouldn't survive without them.

Elli Radinger points on a wolf returning to Europe as an animal tabbed with immigrant's problem - "Yes, of course, but not in my neighbourhood". According to her book, there's no wolf on the most killing animals list (domestic dog is  the 4th, the 1st one is human),[2] making a popularised "fear of wolves" unreasonable.
First wolf - in present-day Germany - was spotted in 1998, migrating from Poland (being under strict Polish protection since 1998 exactly, partly protected since 1995). Currently, German wolf population counts circa 200[3] (first wolf offspring was born in 2000), strictly protected (by UE).

Elli Radinger met the gray wolf as a species, thanks to hand-reared wolves in Wolf Park and learnt how to expertly watch them in International Wolf Center - both my most respected research institutions (alongside Wolf Science Center in Europe). In 90's, she volunteered in the Yellowstone Wolf Project participating in its wolf reintroduction being outset. Then she got along with many important people associated with wolf science personally - like Rick McIntyre (Yellowstone co-worker) or Monty Sloan (Wolf Park photographer).
Everything that makes her wildlife observer's career complete and worth attention, even if the author is not so much a scientist as a wolf enthusiast and perceptive wildlife watcher, a writer narrating her story based on her own natural - not intervened - observations of specified wolf packs or individuals. After reading her "Wisdom of Wolves", it is hard to deny the impression of experiencing a lot, before it would come to realise how rare, unusual and difficult is to observe a wolf - same as the rest of wild animals - in its natural habitat for more than a blink of an eye.

About what they realise and how they look after one another.
Impressive facts about an animal which is closer to us than it seems.