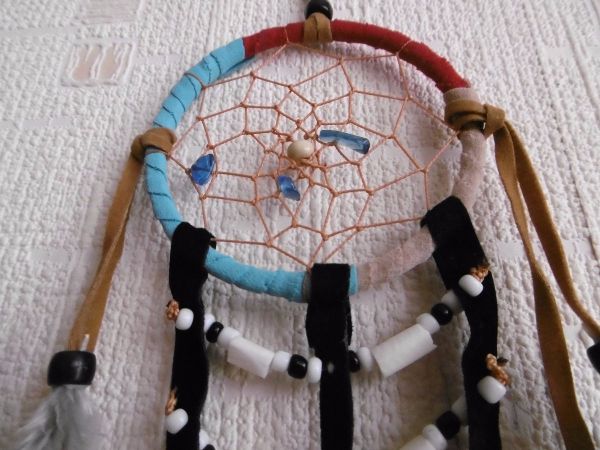 Dreamcatcher as a hanging amulet appeared in one of my previous posts. I wrote then about a crafted tool which "catches nightmares into a net/web and makes them flow down the feather(s), kept there until they are gone with the dawn".

Native Americans believe(d) that handmade dreamcatchers hung somewhere above a sleeper's head (or in the entrance, a place where sunrise reaches with its sun rays) catches and traps bad dreams before they reach the dreamer. It's dedicated for children; Ojibwe (Chippewa) believed that adults should be able to interpret all the dreams and to use that knowledge in proper way.[1] They narrate a lore about creating a dreamcatcher as a tool, passed down by oral tradition.

A spider was quietly spinning his web in his own space. It was beside the sleeping space of Nokomis, the grandmother. Each day, Nokomis watched the spider at work, quietly spinning away. One day as she was watching him, her grandson came in.
"Nokomis-iya!" - he shouted, glancing at the spider. He stomped over to the spider, picked up a shoe and went to hit it.
"No-keegwa" - the old lady whispered - "don't hurt him."
"Nokomis, why do you protect the spider?" - asked the little boy.
The old lady smiled, but did not answer. When the boy left, the spider went to the old woman and thanked her for saving his life.
He said to her: "For many days you have watched me spin and weave my web. You have admired my work. In return for saving my life, I will give you a gift."
He smiled his special spider smile and moved away, spinning as he went. Soon the moon glistened on a magical silvery web moving gently in the window.
"See how I spin?" - he said - "See and learn, for each web will snare bad dreams. Only good dreams will go through the small hole. This is my gift to you. Use it so that only good dreams will be remembered. The bad dreams will become hopelessly entangled in the web."

Pioneered by Ojibwe (proven by history) or Cree, the dreamcatcher was adopted by some other tribes. Different interpretation - Lakota version - states that a certain Indian woman once went to the hand spinner (or just a spider), desperate because of her child's nightmares. Then, according to the instructions, she crafted the first dreamcatcher and it helped. Another one plots about the rule (told to a headman in a spiritual vision by Iktomi, a trikster, under the guise of a spider) by which people's life is a closed cycle composed of being a kid, a youngster, an adult and an oldster, as four parts of the circle of life offering on the run several possibilities - good and bad. Human's fate is to choose every time which of them is correct (or not if the choice is bad) and to spin the web/net where the center hole should help to use dreams and wishes properly. It freely invokes my personal - not directly a dreamcatcher related but related to a wolf - favorite parable.

Once an old Indian Cherokee told to his grandchildren:
"Inside me the battle is fought and it is a terrible battle - two wolves are fighting. One of them represents everything what is negative - fear,  anger, envy and sorrow, guiltiness, lies, false pride and haughty. The other one represents everything positive - happiness, satisfaction, compromise, peace, love, hope, truth, understanding, good will, sympathy and faith."
Children thought for a while, then one of them asked: "Grandpa, which wolf is going to win?"
"The one you're going to feed." - answered an old Cherokee - "The same battle is fought inside you and every human."

Frances Densmore[2] referred to dreamcatcher's origin matching its meaning to the Seven Fires Prophecy passed down by Anishinabe - ancient Oji-Cree (Ojibwe and Cree ancestors), aboriginal peoples of Canada, related to Siberian Inuit. They were foretold by seven prophets and consequently leaded to warning about the coming of the Light Skinned race of people which would diminish the Anishinabe. The prophecies narrated that the native people would be driven from their lands by the other race. Then new people would be born and would seek to continue the voice of the ancestors. The dreamcatcher's loop is supposed to symbolize a compass rose, while the net/web represents family ties and community union.

In reference to archaeological and anthropological discoveries, indigenous people of the Americas are supposed to be descendants of newcomers from Asia (Paleo-Indians) who crossed Bering Strait (formerly Beringia) circa 12 thousands years ago, during the last ice age. It also suggests that dreamcatcher - as a pagan/shamanic/ethnic artifact or not  - may be not exclusive to the Indian culture.
To be exact, Beringia was a land stripe (a natural bridge form) tying up Asian Siberia area (Chukchi Peninsula) to current Northern Canada and Alaska. Ojibwe appeared in Eastern Great Lakes regions of Canada as a hunter-gatherer (karibu, fish) society coming from taiga (coniferous forests, Siberia among others) and nomadic tipi settlers, using dogs on their sleds. They were the Algonquians who brought with them a faith in wendigo as an evil spirit and dreamcatcher making techniques. Besides, indigenous peoples of Siberia (Paleo-Siberians) stayed on the Chukchi Peninsula (Chukchee, Kereks) and Kamchatka (Koryaks). Kereks were assimilated into the Chukchee same as Cree were assimilated into the Ojibwe (or Inuit, related to Cree). Both of those main Siberian autochthonic groups practiced shamanism, strongly based on dreams and spiritual visions. They were also nature worshipers (animism, totemism), same as Ojibwe themselves (and the rest of American Indian tribes right after them). Same Ojibwe as Siberian Chukchi Peninsula tribes looked into the peoples dreams using shamanic practices and spiritual visions.

Let's stop here for a while - a dreamcatcher appears also in Siberian folklore. It's not called asabikeshiinh ['spider' in Ojibwa] but kytgem ['bait' in Koryak]. Both of them used to be a trap although with certain difference - Indian version would filter dreams/choices and let only the good/chosen ones through the center hole, whereas Siberian variant would catch all of them. Kytgem was a shaman's mighty used in visionary preconditions and the rest of msystic rituals.

Explanation seems to be complete but how to explain a potential dreamcatcher's appearance in Slavic folklore?
"Eventide" universe was created by Artifex Mundi[3] as a game series plotting about Slavic deities and lore, mixing them with typical Slavic fictional characters (like Boruta or Janosik for example). Once they were placed into the famous Fern Flower legend from Slavic mythology together with dreamcatchers hanging here and there.
Slavs' origin is uncharted. Written sources lead to Vistula Veneti (Baltic Veneti) as the Early Slavs' ancestors, living along the Vistula and the Bay of Baltic nearby there.[4] Slavs are an eastern branch of the Indo-Europeans (prehistoric people of Eurasia) and most probably descendants of nomadic tribes migrating from Siberia and Eastern Europe during early human migrations (Proto-Indo-Europeans).
Pagan Slavs worshiped elements of nature like the Moon (Chors) and Sun (Svarog). They also practiced witchcraft (related to shamanism) and had familiar spirits (i.e cats, crows, ravens) as spirit animals, guides. Using witchcraft they crafted amulets, talismans or just magical tools, maybe (or rather probably) dreamcatchers too.

Summarizing - Paleo-Indians, Paleo-Siberians, even Paleo-Slavs, each of them reached for shamanism. A dreamcatcher was a spiritual tool - an amulet exactly. It caught nightmares or just dreams; for its American precursors - should bond a family. Complex ethnogenesis makes American natives mixed in ethnic, cultural and spiritual way, remaining more or less under the influence of their Eurasian heritage. So, a question remains - which of the two distant cultures on separate continents passed down that artifact to its fellow if it didn't happen before the Eurasia and America continents split-up.

[1] "Chippewa Customs"; Frances Densmore; Smithsonian Institution (1979)
[2] Frances Densmore (1867–1957) has studied, collected and preserved American Indian music (incl. 2400 transcribed songs) for over 50 years of her life, matching it with the culture and history told by them. Densmore aspired to prevent the misrepresentation of Indian music in the media and the underrepresentation of true Indian music in scientific inquiry, and she suggested that the two were linked. - Smithsonian Institution Archives
[3] Artifex Mundi is a Polish studio creating adventure games basing on mysteries and puzzles.
[4] "An Encyclopedia of World History"; William L. Langer, Harvard University (1940/1948)