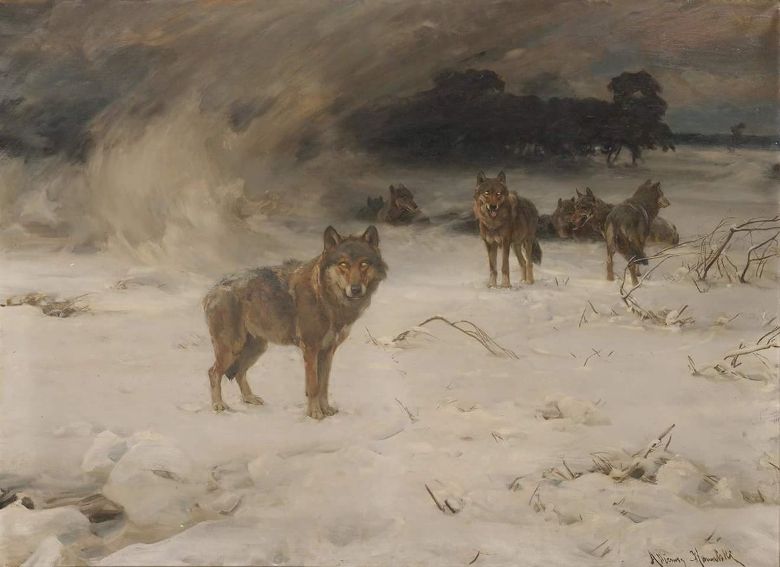 Image of the wolf, even if negative, was clearly underlined marking its place in history. It showed up in lore, fairy tales, songs, paintings and even in children's play. Invariably, it was waking extreme emotions - fear or admiration, often both of them simultaneously, not allowing itself to be forgotten. It was the source of interest (or inspiration) regardless of the base and education (or its lack). Everyone listened, and then passed the information on.
Each form of transmission - verbal and written - arisen on the cards of history of mankind were colourised from generation to generation, spiced with emotions or re-interpreted in random way by their transmitter (or creator) each time it was passed on. Moreover, they're taking the wolf out of its environmental context, initially as a result of lack of knowledge or anthropomorphism using a prism of distorting mirror. In modern times, when richer knowledge about the wolf ecology, ethology and behavior, allows us to interpret folk legends with an appropriate distance

I stumbled upon a wolf painting somewhere on the internet, accidentally. That wolf wasn't a "standard" evil growling or eating the other animal, bloody and cruel, dangerous carnivore (which can impress as well). That wolf was natural in its own being, wild, and beautiful animal like it exactly is - an apex predator, painted together with its pack - "Wolves in a Snowstorm by Alfred Wierusz-Kowalski, oil on canvas".
It's not the only painting by this artist where a wolf is depicted. Moreover, even "wolves attack" scenes by him are somehow wild but pure and strangely bloodless. They seem to be just depictions of typical situations brought out of human-wolf existence context - "Lonely Wolf" (exactly like this - standing alone painted one), "Wolf in the Night", "Wolves Attacking the Sledge", "Chased by Wolves", "Night Attack", "Free and Lonely" or just so "A Pack of Wolves".

Alfred Wierusz-Kowalski (1849-1915) was born in Poland but spent the rest of his life abroad to continue art studies. He mostly painted genre scenes featuring people, hunting dogs, horses and especially wolf as a leitmotif - in multiple variants, all of them dynamic, dramatic and anecdotal at once.
It looks like the reason - or rather the inspiration - for Alfred Wierusz-Kowalski were his childhood memories about an incident taking place during his journey (Poland, Suwałki) when wolves attacked them (their horse sled, to be exact). That remote incident leaded him as an artist to observe wolf behavior and motion for painting those animals in a more authentic way. He even had some wolves in his Polish manor (Mikorzyn) and then temporarily in his workplace abroad (Monachium).

That made me think about the wolf appearance in my native country.

Polish lore and culture are permanently attached to the forest with its wolf, lynx and brown bear as main predatory carnivores. Forests of Poland - as their natural habitat - cover third part of territory, half of territory back in the day. Poland is also a country where all three of those animals are under strict protection - gray wolf species stays under strict protection since 1998. Around 12 000 live today in Europe (2017), where their numbers on the Polish territory doubled - to above 1200-1400 (2016), constantly monitored.[1]
Poland is also known as a country "exporting wolves into Europe". According to dr Mysłajek (SdN WILK), Poland has currently the best expanded/developed network of migration corridors in all of Europe - wildlife passages built over (especially new) motorways and express roads (fenced all along).[2]

In 2017, a large project related to wolf education was inaugurated. "Wilczy Szlak" [Wolf Trail] is the first part of "Wielki Szlak Leśny" [Great Forest Trail], including ośrodek rehabilitacji dzikich zwierząt [rehabilitation center for wild animals] provided by Nadleśnictwo Olsztynek[3] (with professional aviary for wolf rehabilitation) where Kampinos the wolf was treated. Kampinos was injured in an accident and was freed some time ago (equipped with telemetry collar). Most likely re-joined its pack (telemetry collar localizations are close to wolf pack's howling locations).[4]

Poland is the place where Sapkowski created his The Witcher saga about Geralt of Rivia, by Elves (mystical beings strongly connected to the forest, plants and wildlife as allies in co-existence with nature) called Gwynbleidd or just White Wolf - a slayer of monsters being a threat to mankind, person characterised by courage, fighting mastery and quite philosophical attitude towards life and justice. The Witcher's symbol is an amulet with a wolf's head, vibrating when approaching a hostile beast.

There's something like a historical influence in Polish memory. The wolf spirit is not only one-sided negative image placed somewhere deep in heritage of generations, it's kind of mixed with an anciently positive one.

[1] Polish wolf population reached up till 2000 in 2018, according to SdN WILK (Association for Nature "WOLF", Poland)
[2] Free translation from Polish article
[3] Forestry management, in Polish nomenclature
[4] more about Kampinos the wolf via Polish State Forests (Jul.7th, 2017) /article in Polish/

About Kinga Wołk
Europe Website
"Knowledge is not skill. Knowledge plus ten thousand times is skill." - Shinichi Suzuki
Previous Post : My bookshelf - "the Wisdom of Wolves"   Next Post : Fear of predators may change prey's brain structures