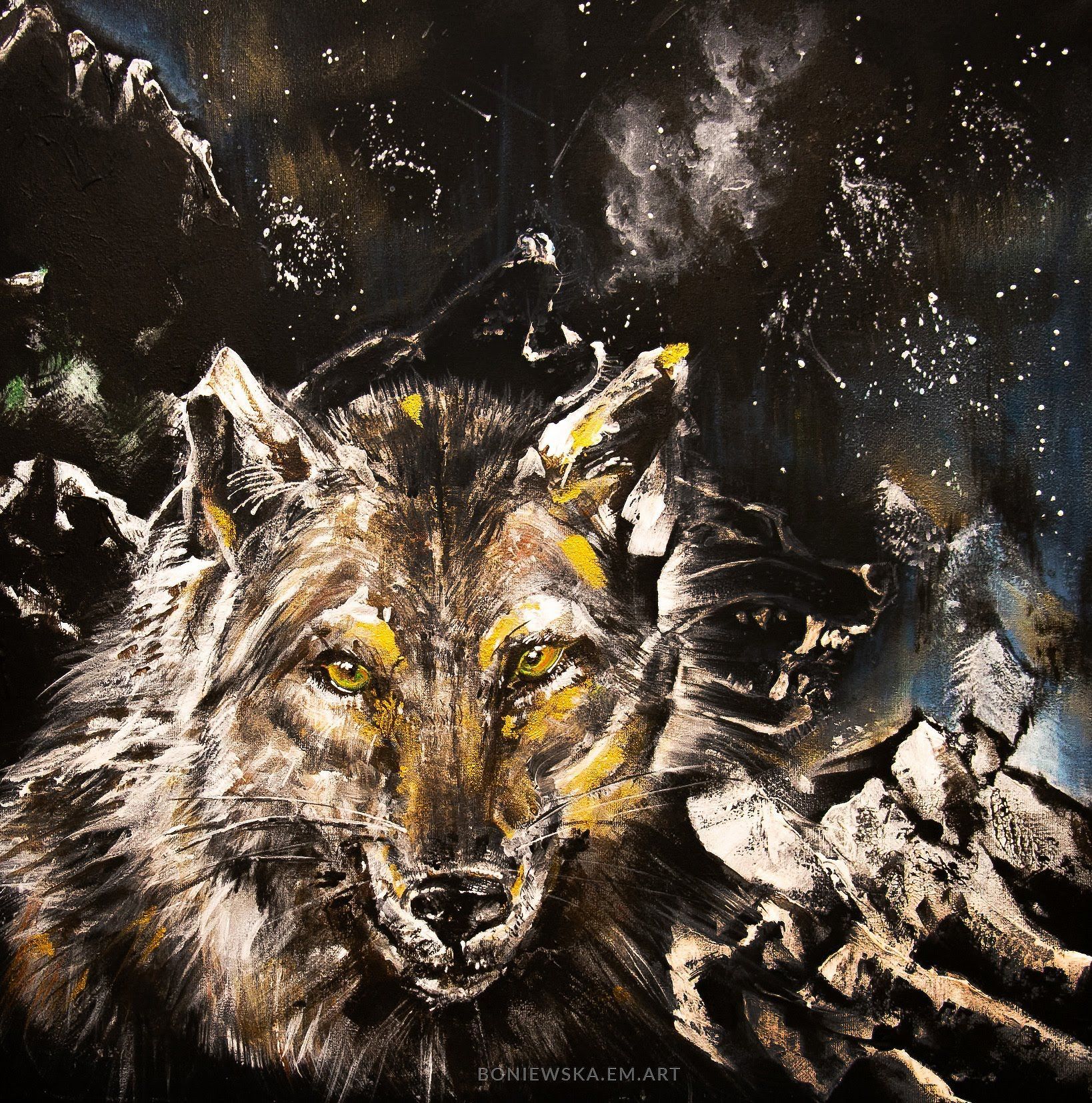 A gray wolf on black canvas. Glittering with silver and gold, under the moonlight, dusk/dawn shadowed, a crepuscular hunter. Twin-faced of three - howling, growling, most of all shinning somewhere in the mountains.
As a Christmas gift, that extraordinary painting has just appeared on my wall, created by a gifted person. More poetic vision than other wild or folk ones. Hopefully, the first but not last, rare treasured art in my life.

Femininity as a source of life, and the wolf as an icon of wilderness, seem to be related mythologically and by folklore. In every fable, myth or legend, the wolf is always associated with both human-related phenomenons simultaneously - power (or pride) and fear (or authority), fear of the predator in nature, meaning fear towards everything out of control.

And yet, a wolf pack is a family pack, lead by a parent pair (which was scientifically confirmed in wildlife) raising up their offspring during every mating season. Leading pair influences collective behavior and social strategies, where wolf family members (just born puppies, yearlings, the rest of mature siblings and their mates, other temporary participants) make up a collage of two basic types - introvert and extrovert.

Elli Radinger writes in her book that it is a leading female of that pair which ultimately decides about wolf pack priorities like survival (hunting territory, preyed animal choice during a hunt, den location at the randez-vous point, preferred partner to reproduce) and being a family core in general.
An assertive leader, a leadership representative, by definition emanates adequate mental force and social intelligence - does not defy or prove anything, preferring a group welfare than an individual one.

"She Wolf", "Wilczyca" in Polish, is also the title of recently reviewed book by Nate Blakeslee - originally titled the "American Wolf" - narrating about the Yellowstone "06", born in 2006, which the National Geographic dedicated a documentary movie.

The author of "Ona wilk" [She Wolf] is my friend, a Warsaw artist, Martyna Boniewska, https://jakmalowac.pl/.